This video is pretty hilarious.

If you’re a Flickr user, you can get 10 free 4×6 prints of your photos to promote their new printing features. [Found via Lifehacker]

If you’re running a web server from your house, you’re more than likely disappointed at the speed of it when accessing it from the outside, because your upload bandwidth (for DSL or cable) is pretty slow. There is an amazingly simple thing you can do to speed that up – enable mod_deflate which comes with apache2. It is a module that will compress the HTTP responses by zipping them up and sending less data over the wire. This article shows how to do it, and how to measure the fact that it’s working. I didn’t even know that most modern browsers are capable of decompressing gzip’ed web pages, but indeed they are. I have observed the front end to mythtv being much more responsive after implementing this change.

Lifehack.com had an interesting list of “50 Essential topics on Economics.” I haven’t read them all, but clicked through one – The Rich and the Poor. It was fairly interesting. Here’s a quick question for you. What percentage of the total income tax collected in the US is paid for by the top 1% of income-earners? How about the top 10%? Click below for the answer.
END_OF_DOCUMENT_TOKEN_TO_BE_REPLACED

After getting cable installed, I was disappointed at the quality of the HD signal – particulary for football. I was seeing what looked like jaggies especially in cases where it was a white color (like a jersey or field line) on a dark color (like the field). The image wasn’t like that before I moved, so I figured it had something to do with the new environment – maybe some bad cables, shaky power, a bad cable box, or maybe just different compression used by Comcast in this area.

After a little fiddling and googling, I figured out what the issue was. Assuming you have a box that looks something like this (I didn’t bother checking if I had this exact model or not) you can get to the imaging menu by powering the box off, and then hitting the menu button. That brings up a few options – one of which is the resolution that the box emits over its Component video (YPbPr) outputs. By default, it was set to 480i. As soon as I cranked that to the more appropriate 720p those problems almost completely went away. I still have some tweaking to do, but in case you find yourself in this situation, don’t forget you have to power the box off to get to this hidden menu.

I found this article from the Chicago Sun Times pretty interesting (thank you metadex).

The new laptop has arrived, and it’s considerably larger than I’d hoped, which kind of sucks. However, the screen is beautiful and it’s making me forget all about the size. I had planned on re-imaging the machine with Windows XP Professional, but caved in and decided to go Linux again – this time with Gentoo/Fluxbox. I had a lot of mixed results last time, but this go around I won’t be using the laptop for work purposes, which means….

Those were all pain points for me with Linux on my previous laptop. Managing wireless connections was also tedius – iwlist/iwconfig – manually typing everything and having no saved profiles, just hacked up shell scripts. I did some research and it seems like GUI tools for this are coming along so I will try them. Also, this time around I made sure to set up a swap partition that was twice the size of my memory, so I should be able to get suspend-to-disk (hibernate) working.

The laptop is up and running now with Fluxbox and Gentoo installed… but I’ll be busy tweaking it for the next few days/weeks I’m sure. It will be nice to have a fully tweaked OS optimized for the machine with no virus scanners running and minimal overhead. When I finally get it set up the way I want, I’ll post a screenshot. 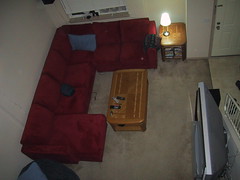 Ok, my apartment is pretty much set and I finally feel like people could reasonably come visit. You can kind of see in the upper left hand side of the picture there is a speaker mounted on the wall. That is one of a pair of Paradigm ADP-370 dipole rears which I picked up at Seattle’s own Definitive Audio. Before I left for Seattle, I picked up their new UltraCube 10 for a subwoofer, so that completes the system. Watching Monday Night Football tonight has been very gratifying. I plan on watching Black Hawk Down in the very near future to really put it through its paces. Come visit. I can almost make it loud enough to drown out passing firetrucks.

I feel bad for the people who ordered those shirts earlier this week. By the time they arrive, the Red Sox will have already been eliminated. I guess the “Why not us again?” question has been answered.

The couch has arrived, so it’s starting to feel more like home. Marysharon and I picked out The Big Red Machine.