A few weeks ago I spent a week and a half traveling across the country by train. I enjoy traveling. By that I don’t just mean “going somewhere” – but the whole act of traveling, including long plane rides, airports… the stuff that many people dislike. Though there’s some burden to having to be somewhere at a given time, for the most part the whole act is decision-free. You get on a (plane/train) at X o’clock. You sit in your seat. You can read a book, watch a movie, or use the computer. It’s hard to explain why having a tightly constrained list of options feels so freeing. But, anyone who feels burdened by endless decisions can probably understand what I mean.

When you ride a long-distance train (versus a commuter) you have two options: a Coach Seat, or a Roomette. I tried both: got a roomette for my longest leg (30 hours from Sacramento to Denver) and coach seats for the shorter legs. 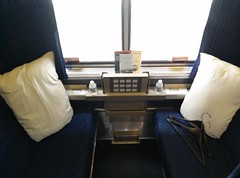 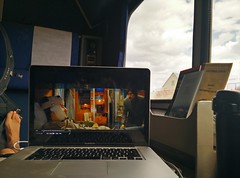 The Roomette is designed for two people, so it’s quite roomy. As seats, you’d be sitting facing one another. As beds, he two seats slide down and fold together, and the second bed is the “top bunk” which folds down from the ceiling. It’s comfortable, private, and comes all-inclusive with meals in the dining car. Each sleeper car probably has a dozen rooms, there are multiple bathrooms and showers per car, as well as an in-car attendant (similar to a flight attendant) who sleeps in the car as well. 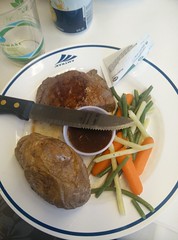 Train meals are considerably better than most domestic flights’. They have a dining car with a kitchen, so the food is cooked to order. The menu is small, though. In 2-3 days you can easily go through all of the breakfast, lunch, and dinner options. The dining car also requires all tables are seated with 4 people, so if you’re traveling alone or as a couple, you’re guaranteed to be seated with other passengers. 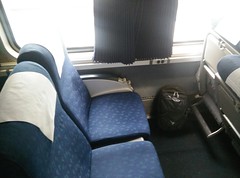 The coach seats are not remarkable, again unless you compare them to airplanes. They have considerably more legroom than even a domestic first-class plane seat, recline much further, and there’s an outlet for every pair of seats. The best part though, is that if you’re on an overnight trip, they somehow seemed to find a way for every passenger to get 2 seats. I never had a neighbor for a “redeye” trip. So, you can kick up the legrests on both chairs and make a pretty decent bed.

Surely the sights on the train vary based on the route you take, but here are a few examples of mine… riding though Colorado, and then a sunrise trip leaving Omaha:


While you’re reading, or watching movies, or writing code, you can always look out the window and watch the scenery change.

In each city, I tried to see the kind of sights, and eat the kind of food, that the city is known for. Sportswise, I saw a Rockies game in Denver, a Bulls playoff game in Chicago, and a Cubs game at Wrigley. I had a “Helton Burger” at Coors field, Nebraskan steak in Omaha, a few deep dish pizzas in Chicago, and a Half Smoke at Ben’s Chili Bowl in DC.

Most of the people on these long-haul trains are retirees who enjoy the rumble of the train and aren’t in a rush to get anywhere. Everyone’s quite talkative during dinner, curious where everyone else is from, going to, etc. If you spend time in the “view car” – which is a car with bigger windows, designed just for watching the scenery, you’ll likely find the same type of travelers looking to chat. On the lower-level of the view car is the “snack car”, also known as the “bar car.” I didn’t spend much time there, but I did meet an aspiring hip-hop producer who spent the better part of his journey there.

Some people asked me if it felt lonely. I was somewhat surprised that it did not. I don’t credit my fellow passengers for this, either. I think it’s because -though many stretches of the country don’t have cellular service- you’re still mostly connected. It’s not at all like a long plane ride in that way. If you have a funny experience, you can call or text back home, and get a response. Though you may be away from your friends and family, you’re not disconnected. The balance between “getting away” while still “being in touch” was something I really enjoyed. During the times you are offline, you can take that as your cue to read a book, or watch a movie, or look out the window and doze off. The brevity of your list of options is as calming as the options themselves.