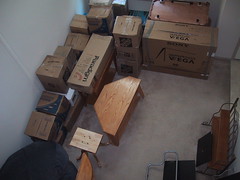 Well, all of my stuff arrived today. Of course, when I say “all” I mean “everything except my bedframe, a box of tools, and no doubt several other things I have yet to realize are missing.” The good news is my TV and speakers suffered zero damage and appear to work flawlessly. Plus, not a single dish was broken. The bad news is that my computer desk was turned into a pile of broken wood and twisted metal. Same goes for my TV stand which was splintered and broken. Anyhow, I’ve started to unpack and hopefully everything will fit. I picked up a new TV stand after work today so I could set all that up. I still need to buy a couch. And a new desk, apparently. 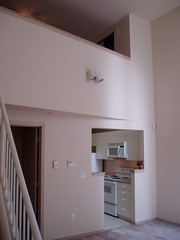 I’m in my new home, albeit a very empty one until the movers come. I’ll take pictures once I have all of my stuff moved in.

Speaking of movers, apparently I’d underestimated the weight of my stuff by about 2,000 pounds (estimated 2500 pounds, ended up being over 4000) and therefore it will cost me about $1200 more than expected to move. Awesome! The movers will come sometime next week at which point I’ll be able to unpack and feel like I really live there… although Comcast won’t come until next weekend so I still won’t have cable/internet access until then. Thank god for Seattle’s wealth of coffee shops with free internet access.

Check out this employee profile. What a go-getter! No need to read through the whole thing and make fun of Marysharon line by line though, I’ve already done that.

We just spent the last night in Spokane, WA, so we should have a little under 5 hours of driving before we’re in Seattle. Montana and North Dakota were beautiful states to drive through. Western Montana and Northern Idaho were also nice to drive though, but seemed a lot like Northern New Hampshire.

On Friday my father and I made it into Toledo, Ohio, where we spent the night. When we woke up we went to Waffle House for breakfast. We noticed that across the streed was a gas station. Like most gas stations it had a sign with 3 prices on it. On this particular gas station, the prices were for: Unleaded Fuel, Deisel Fuel, and Marlboro Cigarettes.

Yesterday we went from Toledo to Chicago. We stopped in Chicago for lunch, and went to the top of the Sears tower just to check it out. It was very cool. It seemed like much of downtown Chicago (at least the area we were in) was closed on weekends. It was more professionally-oriented and catered to the office workers. We left Chicago and made it to Minneapolis. We stopped over and met Marysharon’s parents who live in Woodbury, MN. We had a good time and it was a nice break from all of the driving.

From what I understand, from here on out a lot of boring, Western states are in our future. 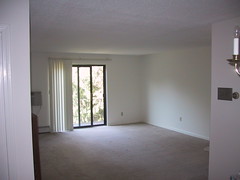 It all started yesterday. My plan was to have the movers come today, September 8th, and then my dad and I would begin driving out tomorrow. I get a call yesterday at 11AM from the movers saying “what time today should we come?” to which I replied “today?”. I told them I could probably be packed up by 5pm, and was actually pretty happy that they decided to come a day early rather than a day late.

They show up early at 4pm, and a guy named Avi comes in and has me sign all of the paperwork where I basically say they can break all of my things because they’re all worthless. I was aware this was coming which is why I purchased moving insurance separately. Avi and his friend (who’s name I never learned) worked on moving what I had packed while I continued to pack. I came to find out they live in Brooklyn, and Avi moved here from Israel when he was 26. He wouldn’t tell me how old he was now, but as he packed up my TV he said “I wish I had liked school more. Why? Why? Why?” I bought pizza for him and his coworker, who didn’t speak much English. Avi scolded him for having a slice of pepperoni because it contained pork. He kind of laughed it off and switched to cheese.

They were good guys. Avi’s friend was trying to teach me some phrases which sounded Arabic that I could say to women if I ever went to Israel. They ended up finishing around 8pm, at which point I started cleaning up. The apartment is mostly empty now, as you can see in the picture. I’ll turn in my keys today and the drive out West starts tomorrow.