Kind of an interesting article by Malcom Gladwell, if you have the time. 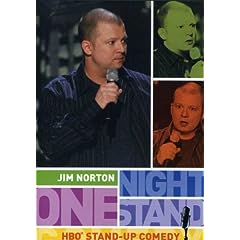 Jim Norton (my buddy) put out a DVD that’s getting some very funny reviews on Amazon… full of inside jokes if you’re an O&A fan.

Among my favorites:
This review from “Rusty Yates“:

Me and my wife Andrea got an advance copy of this awhile back and boy did we have a chuckle. […] if she weren’t currently bathing our five children she’d say hi. I even hear my youngest, Paul screaming something from the bathroom so Mommy must be sending her best.

When the goat comes down to the road, you gotta go to the mountain…this DVD is bozy, bozy, bop, zitty bop good

If you liked him in American History X, you’ll love Ed Norton in this.

I wasn’t familliar with the actor who plays the PC-user, but I agree with a lot of the commentary here.

I recently switched to a Mac as my primary personal desktop, and although it worked fine with my digital camera and printer (no better, no worse, than Windows) I needed to chuck my Windows-only webcam. I also needed to get a new keyboard because mac minis don’t have PS/2 ports. Smug ads like this are really more aggravating than anything else.

Techcrunch posted an update about photo-search company Riya today that was pretty interesting.

Dating is another (if slightly creepy) use for the new Visual Search engine. See someoneâ€™s picture on MySpace that you like? Search on their photo to find single people who look similar and who have profiles up on match.com or other dating sites.

Taking their photo search and basically allowing you to create a “find more like this…” feature for people instead of products sounds pretty innovative to me. Perfect for the case where you know someone who’s attractive, but don’t care for his/her personality.

I have been beta testing Farecast, and I just recently used it to book a trip to Atlanta. The service claims to predict whether or not airfare is going to go up or down, helping you decide whether you should buy your tickets now or hold off. The idea is cool. The implementation, when completed, will probably be cool too. What I’ve experienced with the beta is that it feels like more of a novelty than a useful tool.

When I first started playing with it, I couldn’t find a combination of dates and locations that would produce anything but a statement that fares would be increasing, so I should buy now. That had me skeptical – after all, why would they tell me not to buy when they make money only when I do?

When I used it to book the Atlanta trip, I found a case where it did tell me to wait. I need to be in Atlanta by noon on a Friday, which means that I’ll have to leave Seattle late Thursday night. Farecast told me a Thursday->Sunday roundtrip will be decreasing by an average of $20 over the next 7 days.

But… it then occurred to me that the information they were providing me isn’t useful. I needed a late night flight on Thursday, so I could go to work during the day. So, even if the average ticket price dropped $20 over the next week, what if all the late night tickets sold out? Or, what if morning tickets drop $40 and late night tickets increase $20? The averages aren’t useful when you care about specific times. That said – according to the site they are working on predicting how airfares will move within time ranges. The ranges will be broken up into 6 groups, which seems like sufficient granularity for most cases.

They are not guaranteeing anything with the price predictions (which is probably for the best). They tell you that they are “80% confident” in their prediction. So, there’s still some element of gambling here. If they’re 80% sure the prices will drop for your trip home for Christmas, and you wait, and the flights end up doubling in price or selling out (which is a possibility 1 in 5 times), then you’re pretty much up a creek. It seems like they’d be well served to build in some monitoring tools for the case when they blew their prediction, and they can let people know as soon as possible.

I do like what they’re trying to do though – if they work out some of these details, it could be a very useful service. I double-checked other price searches and didn’t find any better deals, so if nothing else they seem to have a top-notch flight search.

Another completely ridiculous statement from the guys at 37signals today regarding Microsoft:

I predict major layoffs within 12-18 24 months. Upwards of 10-20%. MS needs to light a fire and get lean and they know it. The market knows it too and would love to see it happen.

After a number of comments describing how absurd a prediction that is (including, I like to think, mine) Jason from 37s ups his prediction of Microsoft layoffs from 1-1 1/2 years to 2 years. Either way, he’s being ridiculous. They continue to speak like complete amateurs, while using the traditional tech-pundit tone. If I didn’t love the Ruby on Rails community so much, I would have unsubscribed from this blog long ago.

I just saw two neat applications of computer-like intelligence integrated with parts of our regular lives. (both via engadget)

And this umbrella, who’s handle glows to let you know whether or not you should take it to work, based on weather reports in your area:

This kind of thing is very cool… I hope to see it become cheaper and more popular in the future.

Mentioned over at Signals vs. Noise was this interesting ad campaign from Amnesty International. The tagline is “It’s not happening here but it’s happening now” and it features various images, outdoors, designed to appear overlayed with the real background. Pretty cool.

The TechCrunch party was a good time. It featured free pizza, free beer, and a free opportunity to meet up with some of the bigger names in the local tech field. John Cook was there and wrote an article about it. Michael Arrington was there of course, and I was able to briefly pitch him my startup idea. I also talked to Mike Davidson, CEO of Newsvine, about what it was like to start up a company, and how he went about financing it. The CEO of Wetpaint was there too, and we talked briefly about what it’s like being at a party made up of a subset of the 53,651. ie. not the real world.

The three main sponsors also gave demos : TripHub (a tool for organizing group travel), Farecast (a neat tool for predicting if airline ticket prices are going to go up or down), and Redfin (a real estate site geared towards Seattle and San Francisco). Each of the demos was fairly interesting. TripHub might be worth using for Callahan’s Bachelor Party. Farecast could be useful too, but it’s still in private beta.