I posted some pictures of my weekend in North Carolina. As usual, you have to be marked as a friend in Flickr to see them all.
END_OF_DOCUMENT_TOKEN_TO_BE_REPLACED

Add this to the list of Google’s noteable flops.

This is an interesting article comparing the two. While I don’t see a person having wealth as an obligation to give charitably, I still admire people who do and look down on people who don’t. I’m fairly disappointed that the 67th Richest American in the world hasn’t given back to charities.

That’s not to say a rich individual doesn’t give back to society (almost whether he likes it or not) via:
– All of the people who work for, and get paid by, Apple Computer
– The people making money from the stock which he helps drive up
– All the companies and companies’ employees who exist and profit by making iPod accessories (the entire iPod sub-economy).
– The amount of taxes he pays individually, and Apple pays on a corporate level, plus sales taxes on their products in the various states.
– The actual products they make, which people find enjoyable and willing to purchase because they benefit their lifestyles (computers, software, iPods, music, videos, etc).

All that said, an individual worth $3.3 billion should be giving to charities in my opinion, so I think it’s good that people are writing articles like this to, hopefully, shame him into doing so or reveal to consumers that maybe this guy isn’t worth supporting.

Rumor has it there’s a picture of Marysharon in the current issue of Fortune magazine. It’s the issue that talks about the best companies to work for, and she’s pictured under Microsoft. I haven’t seen the issue yet, but if you have let me know.

The lawsuit against Google is all over the news today. I don’t feel like I really understand what’s going on. First, I was trying to figure out exactly what information the government wants. Most of the news articles are vague on this except this Reuters one which says:

a subpoena issued last year for one million random Web addresses from Google’s databases as well as records of all searches entered on Google during any one-week period.

Even still, that’s not very specific. All search terms? All search results? IP Addresses? I have no idea. I understand the whole purpose of this is supposedly pornography-related as part of the Child Online Protection Act but it is totally unclear what good this information is. There’s a lot of free data about where people surf at Alexa.com and Google has some public information with their Zeitgeist summaries. I imagine that’s not good enough for what the government is looking to do, but then again I have no idea what the government is looking to do. I don’t understand why anything about this would be top secret unless it actually has something to do with some terrorist/national security hunt, but that’s not what they’re saying.

Let’s say Google sends the government a list of all of the search terms in a given week. Three years ago it was reported that there were 250 million Google searches per day and there haven’t been any updated statistics since. Let’s conservatively estimate that number has increased to 300 million a day (it’s probably much higher). So, Google turns over a week’s worth of search terms – 2.1 billion phrases (assuming they don’t aggregate duplicates). What does the government expect to do with those? Probably fumble around with how to manage all that data and sit back and wonder how to get anything meaningful out of it. I assume they plan on some number-crunching. Let’s say 40% of the search terms involve pornography, and 5% of those the illegal kind. So what? Where does that leave us? Are they writing a research paper or investigating a crime? The fact that this is so mysterious is what bothers me, and why I’m glad Google didn’t roll over and cough up the information.

I have no idea who this guy is, for all I know he’s a crackpot, but the article itself is interesting. It was mentioned on digg and is called “The Coming Collapse of Income Tax“.

The first chart on the page made me skeptical, because it’s dumb and unnecessary. However I saw this “possible trigger” and it hit home because it’s something I’ve felt for years:

A wealthy individual files a well-publicized lawsuit against the IRS citing that the individual, who is far above average intelligence with above average resources at their disposal, is simply unable to comply with the tax code. The lawsuit places the IRS and politicians overseeing the system in the untenable position of having to explain to the country how easy it is for people to comply with the tax code. Wide spread political embarrassment forces change to begin.

His second and fifth points about the dealings of non-traditional/ virtual currency is also interesting and have raised some questions recently.

It’s about time. After seeing the Patriots get hammered with a few game-changing calls (one of which was clearly wrong from the replay) and then the Steelers, I’m glad the refs are taking some heat.

The Slingbox looks pretty sweet. Plop it atop your TV, and presumably you’ll be able to watch your TV on any computer anywhere via thier proprietary streaming technology. Currently Windows-only, but a Mac version of the player will be coming out this summer.

I’m growing somewhat tired of MythTV… they haven’t updated their website in nearly 8 months and the last major release was over 10 months ago. There are still no decent streaming plugins for it, so although you can watch TV on any computer in the house, you can’t watch it from a coffee shop or anyone else’s house (much less a cell phone)… it needs too much bandwidth. Since I don’t have time to work on a better solution, I may eventually cave in to these commercial options.

Schulte sent me this link with the subject line “hahahahaha”. Having lived here for a whopping 4 months, I think the rain talk is pretty overblown. It rains often but it doesn’t rain constantly. So, it doesn’t surprise me that we’ve had measurable rainfall every day for the last 22 days (and counting) but the fact is that it’s not raining all day every day. Yesterday sucked because it rained on my walk to work and my walk home, but that’s just unfortunate timing. It’s off and on.

This was an interesting quote from the article: 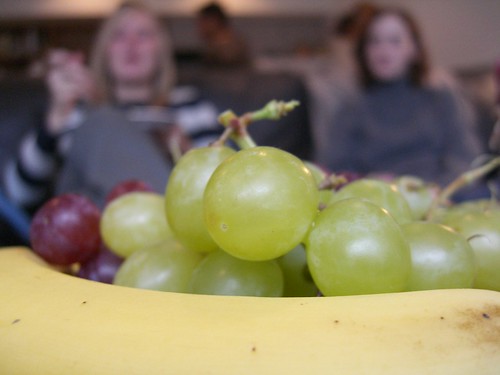 Pictures from Vaughn’s birthday are online. If you’re marked as a friend in Flickr you’ll be able to see them.